My Father, this Freakish Guy 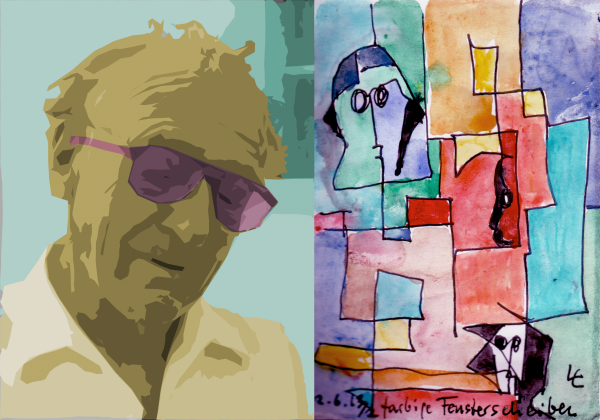 This bitter feeling – undoubtedly unjust, especially considering the circumstances described above – unevitably invades me every time I think of my father: this freakish guy! Although my Italian grandmother, Delfina, and my father’s sister, Leda, always spoke of his high intelligence, his kindness and the infinite veneration his patients felt for him be-cause of his tireless medical work. My sister Lill also, despite everything, preserves in her mind the image of a very kind and friendly man, as she reproachfully explained to me after reading this text.

Yet my final and most precise memory of him, stemming from when I was about 5 years old, is how my father, when my fiercely determined mother suddenly left Mercatino Conca at 3 o'clock in the morning with Lill and me to catch a bus to Rimini and then a train to Switzerland, never to return, he lay limply in the double bed of their dimly lit bedroom, a cigarette in the corner of his mouth, and as farewell only mumbled weakly: “Alright, you may leave – as long as you come back.”

My father, the fascist

And he was a also fascist, a dandy fascist with slick black hair. Already at the age of 15, he is said to have taken part in Mussolini's notorious “March on Rome,” which led to the seizure of power by the fascists in October 1922. Once he even gave me a black Balilla cap (the Balillas were a fascist youth organization, comparable to the Hitler Youth), deco-rated with a golden double eagle, promising me a black shirt just like the one worn by some of the boys in the village. I will never forget, either, what he told me one day, when I was about 5. I was overjoyed at his taking me in his Fiat Topolino to see a patient high in the mountains above Mercatino. During this trip he declared that, if Mussolini ordered it, I would have to throw myself without hesitation headfirst into the huge dried-up bed of the river Conca next to our house. And many years later, when I visited Aunt Leda in Pontedera, she gave me a package of old letters written by my father. Looking through them on the train back to Switzerland, I discovered a letter to his mother about his plan to take a position in Mercantino and about some local opponents to this plan. And then there were some dark hints that one may have to send them the Black Shirts along with some castor oil to break their resistance. That was a popular method of the Italian fascists at the time: to forcefully infuse their opponents with large doses of castor oil, which at best led to severe diarrhea, at worst to an agonizing death. Overwhelmed with shame and anger, I threw the letter out of the window of the moving train.

Equally ingloriously, Papa had arranged with the Jesuits, as repeatedly confirmed by his sister Leda much later, to spy on us in Switzerland. In 1940, he  even developed a precise plan to kidnap Lill and me with their help, and tobring us back to Pontedera. Much of my mother’s strange behavior during this time, including her abrupt flight to Grindelwald and her apparently irrational fear that we might be kidnapped on the way to school, appears in a different light in this context. A good part of her behavior which was bluntly dismissed as “creeping schizophrenia” may in fact have been the depressive reactions of a strong and rigid but also very vulnerable woman who had good reason to be frightened by dan-gers extremely difficult to cope with.

…and other events that possibly drove my mother crazy

It also befits my doubts about my father and my uncertainties about Mamma's illness that my Italian grandmother Delfina (Delfina Ciompi-Boschi, 1884-1971), a strict and honorable Tuscan woman who always seemed a little aristocratic to me, repeatedly assured me that “la Klary” (from “Clara”) should be fully respected in everything she ever did – how-ever strange this might have seemed at the time. What exactly she meant, she never specified, however. Presumably, she was alluding not only to Mamma's escape to Switzerland, but also to an earlier and similarly abrupt trip to England, which, according to Leda, was related to the aforementioned affair between my father and a close relative of my mother’s during her second pregnancy. Veiled references to this affair were also found among Papa's mentioned letters to his mother. In any case, it is certain that Papa secretly met this Swiss relative around 1930 in Frankfurt am Main, where he was staying while studying for several months. Mamma's then barely 20-year-old brother Gottfried – our be-loved “Unggi,” who at times assumed a kind of father role for Lill and me and had until then maintained friendly relations with my father – is said to have been so angry about this that he had threatened to travel to Italy to shoot his brother-in-law with his officer's pistol.

How many secrets carefully guarded from Lill and me by everyone for decades, how many unclarified family taboos! Enough in any case to give our sensitive mother much, and probably much too much, to think about. Maybe enough to drive her truly crazy over time.

Luc Ciompi (born 1929), Swiss psychiatrist, Schizophrenia researcher, pioneer of integrative psychiatry and founder of Affect-Logic celebrates his 90th birthday. He lets us participate in his personal, scientific and ideological reflections. It shows, that even an old age can be a fascinating time full of unexpected highs and lows.